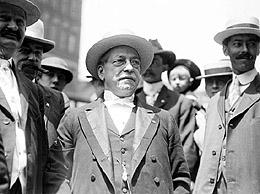 Samuel Gompers, as president of the American Federation of Labor, visited Topeka, Kansas in February 1891 to speak on labor issues. At that time the labor organization’s legislative aims included the establishment of an eight-hour work day, the elimination of child labor, the elimination of convict labor and prevailing wages on public works projects. These objectives were founded on the belief that American labor markets should provide skilled workers with decent wages and time for family, while children should be free to earn an education.

Gompers, in arguing for workers being be paid the “current or prevailing” daily wage, made the case that government was being asked to set a good example for the private sector. Further, the AFL focused attention on public works because government, as a major purchaser of construction, should not benefit at the expense of wage earners.

At that time many states required convicts to earn their keep by building roads, farming, manufacturing textiles, and sewing garments. Goods produced by convict labor were sold at reduced prices, having the net effect of depressing wage levels and unfairly competing with private sector businesses. The AFL called for an end to convict labor. Although Gompers and the AFL took the position that unions should be nonpartisan, many of their political strategies practiced in Kansas were allied with the Republican Party’s position on economic issues.

In Kansas, legislation on an eight-hour day, which included a section on prevailing wages, was enacted March 10, 1891. This first prevailing wage law stated “That not less than the current rate of per diem wages in the locality where the work is performed shall be paid to laborers, workmen, mechanics and other persons so employed by or on behalf of the state of Kansas.” There is substantial evidence that the law was not effectively enforced at first. New York became the second state to pass a prevailing wage law (1894) followed by Oklahoma (1909), Idaho (1911) Arizona (1912) New Jersey (1913) and Massachusetts (1914).

Subsequently, three federal laws combined to provide the legal basis of prevailing wages at the national level. They are the Davis-Bacon Act (1931), the Walsh-Healy Public Contracts Act (1936), and the Service Contract Act (1965). The first applies to construction, the second to manufacturing, and the last to the service industry. A prevailing or current wage law is intended to minimize local wage impacts of federal projects.

The Davis-Bacon Act was a method of preventing the federal government from reducing local area construction wages. There were concerns that out of state firms would low-bid a project and bring in low wage employees to complete the project. The net effect would be to suppress local area wages. Hearings on the federal statute began in 1927, but the bill was not passed until March 3, 1931. President Herbert Hoover signed the Act into law.

The language of the statute was sufficiently ambiguous to require clarification in 1935 before it could be effectively enforced. Because the U.S. Constitution’s Tenth Amendment constrains the federal government’s ability to dictate contract terms for state government projects, state and municipal governments were required to institute their own prevailing wage laws, where they chose to do so.

Some argued that one of the major reasons prevailing wage laws were passed was to exclude African Americans from construction jobs, making them “Jim Crow” laws. In the legislative debates on the federal prevailing wage law in 1931, Republican Representative Robert Bacon remarked on an Alabama contractor who came to his New York district in 1926 to build the Northport Hospital for the Veterans’ Bureau.

The Alabama contractor was said to undercut local wages and hours of work by importing cheaper southern labor. However, Rep. Bacon stated that the Alabama contractor used a racially mixed crew obviating the claim that he was aiming his legislation was a Jim crow attack on southern blacks. Later, the 1891 Kansas law was examined by the U.S. Supreme court in Ashby v. Kansas. The court’s majority opinion upholding the Kansas law was written by Justice John Marshall.

In states with prevailing wage laws there are more apprenticeship training and safer workplaces, more construction workers with pensions and health insurance coverage, and employees have higher productivity and higher incomes, when compared to states without such laws. From 1891 through 1969, 41 states and the District of Columbia enacted prevailing wage laws.

Despite these economic advantages, beginning in 1979 there were widespread efforts to repeal existing prevailing wage laws. Changes in the dominant political philosophy and government budgetary difficulties are often cited as the cause of the repeal movement. Between 1979 and 1988, nine states repealed their prevailing wage laws. Florida was the first to repeal its Davis-Bacon legislation, followed by Alabama in 1980. Utah was the third state to repeal, but only after vetoes from its governor. Arizona repealed its statute in 1984, followed by Idaho, Colorado and New Hampshire in 1985.

Kansas, the first state to have a prevailing wage law, repealed its law in 1987, with Louisiana following in 1988., In 1995, the Oklahoma law was judicially overturned because the state’s prevailing wage survey was unconstitutionally over-reliant on the federal survey. In these repeals proponents argue that substantial savings on public construction costs would follow repeal. Several studies of the impacts of repeal have not found conclusive evidence that the repeals have saved a significant amount of public funds. If few benefits have been gained by repealing, then what are the social and economic costs of repeal? The economic rationality of the repeal needs to be analyzed.